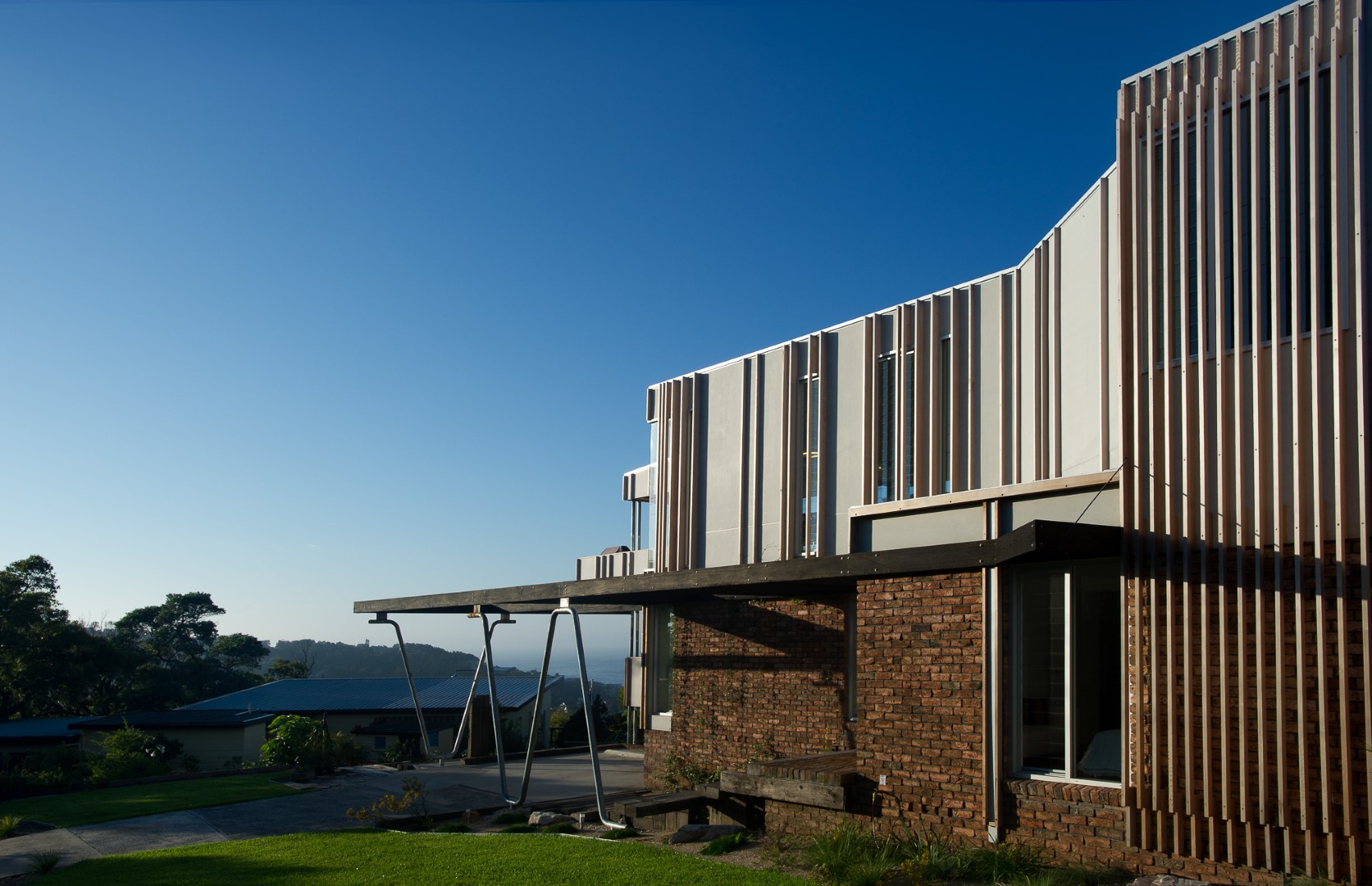 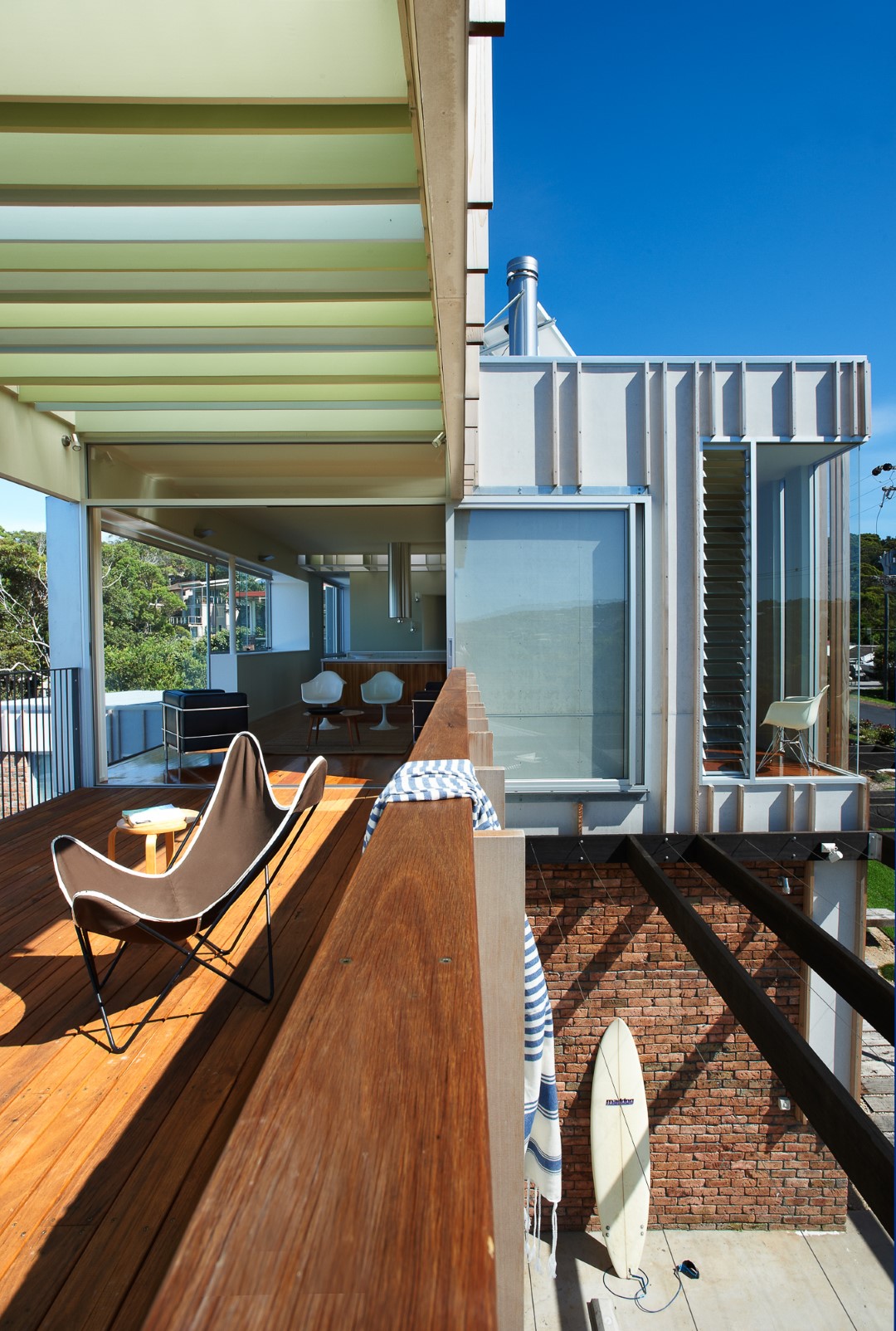 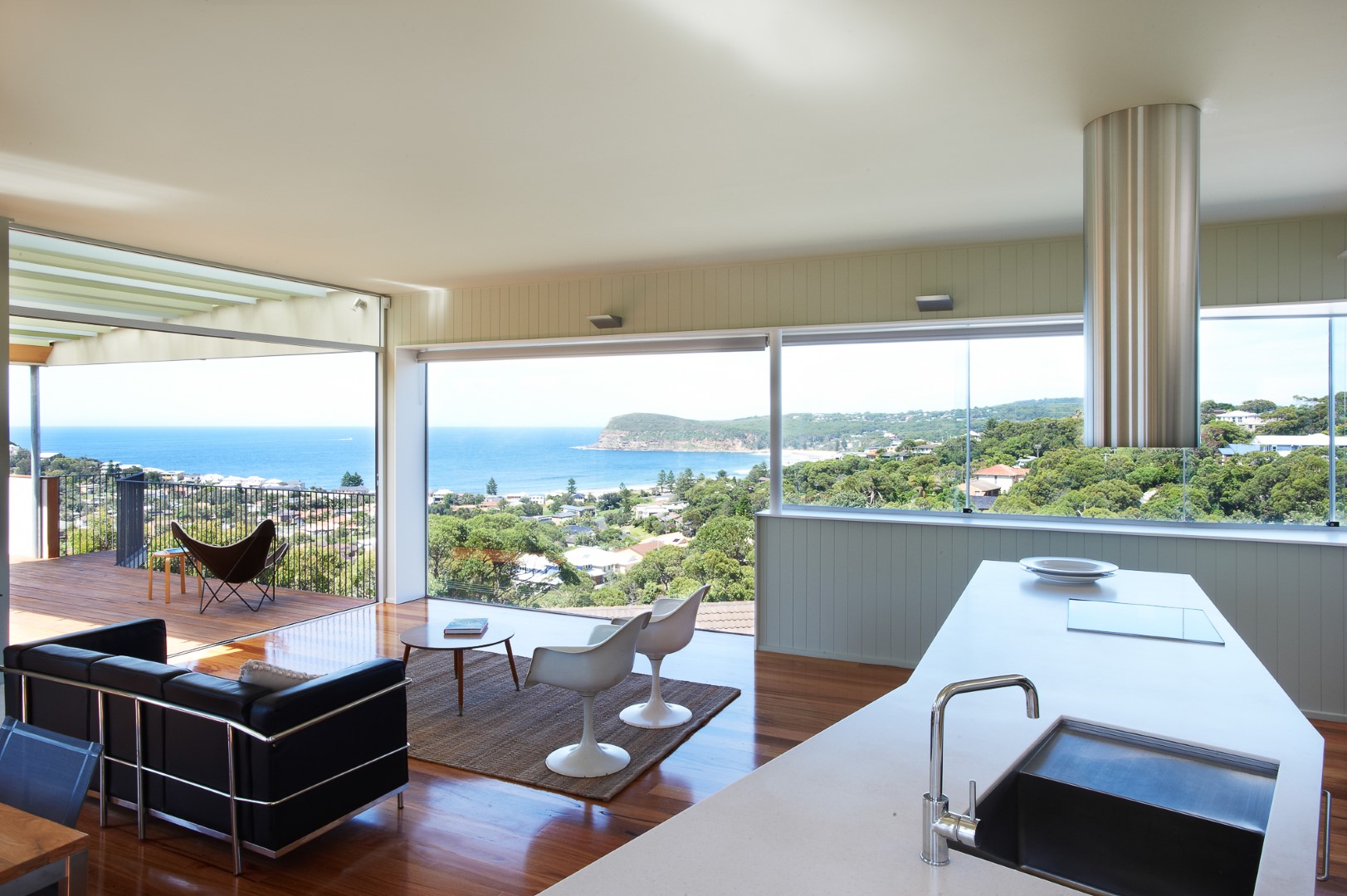 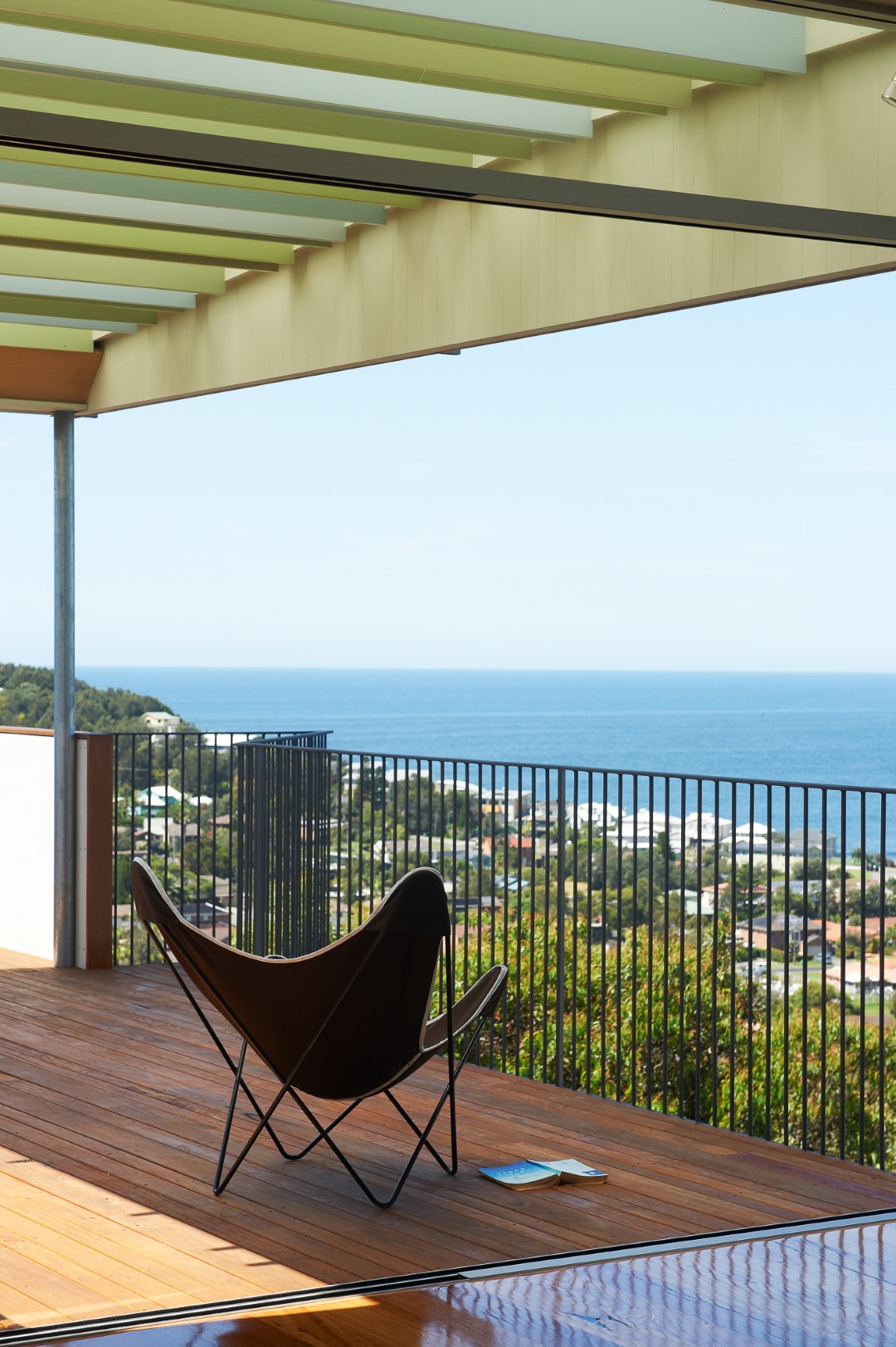 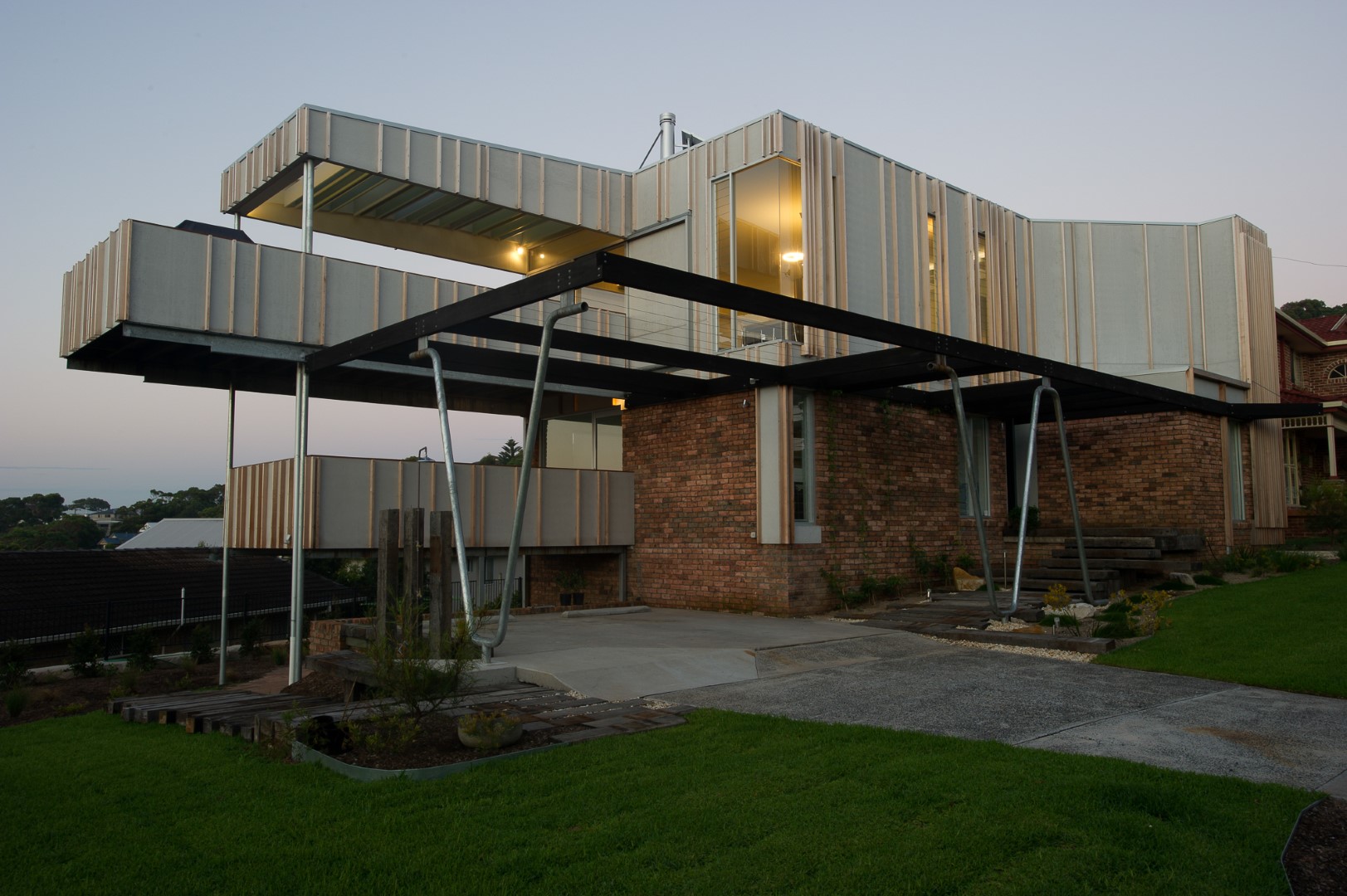 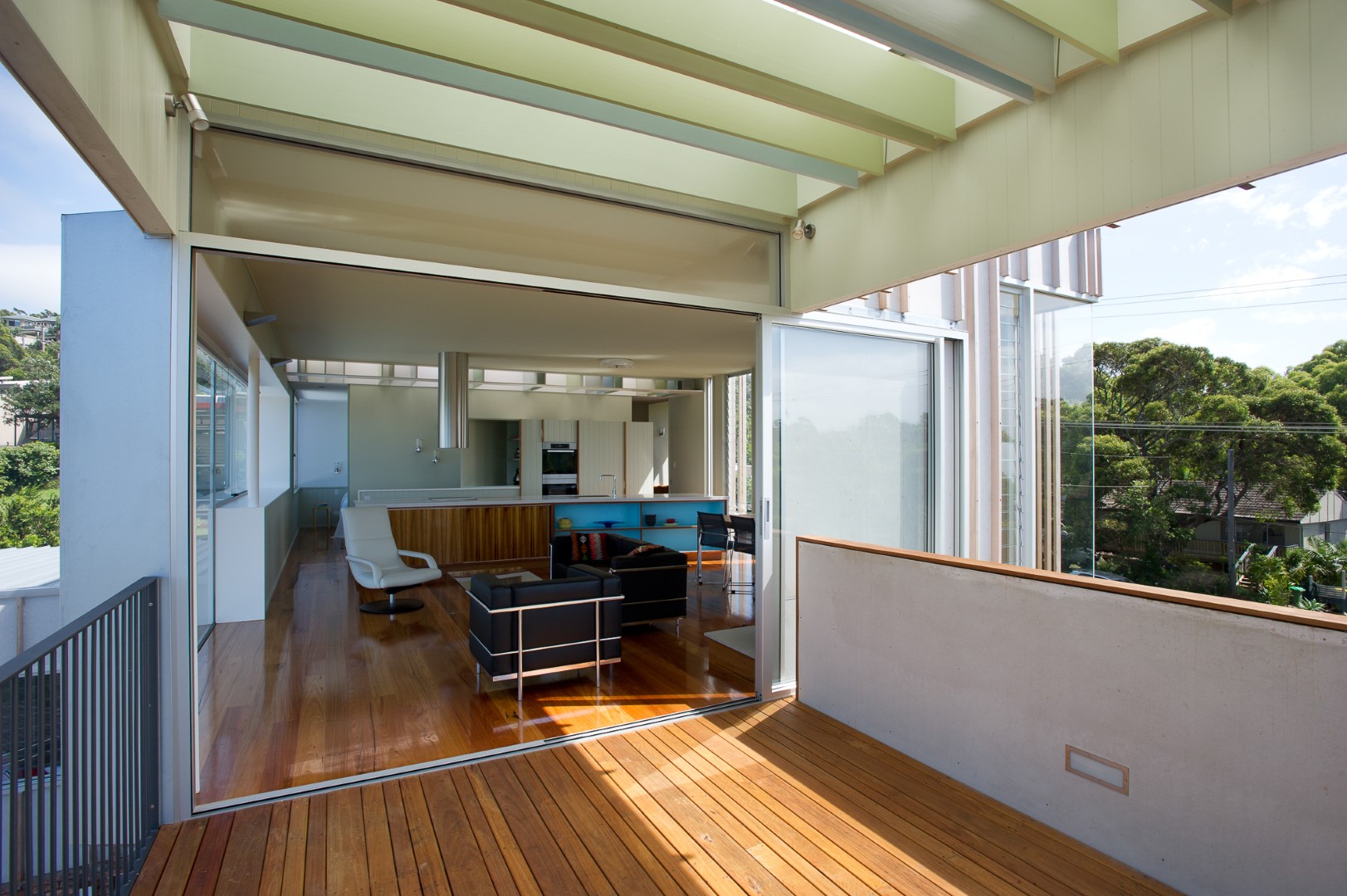 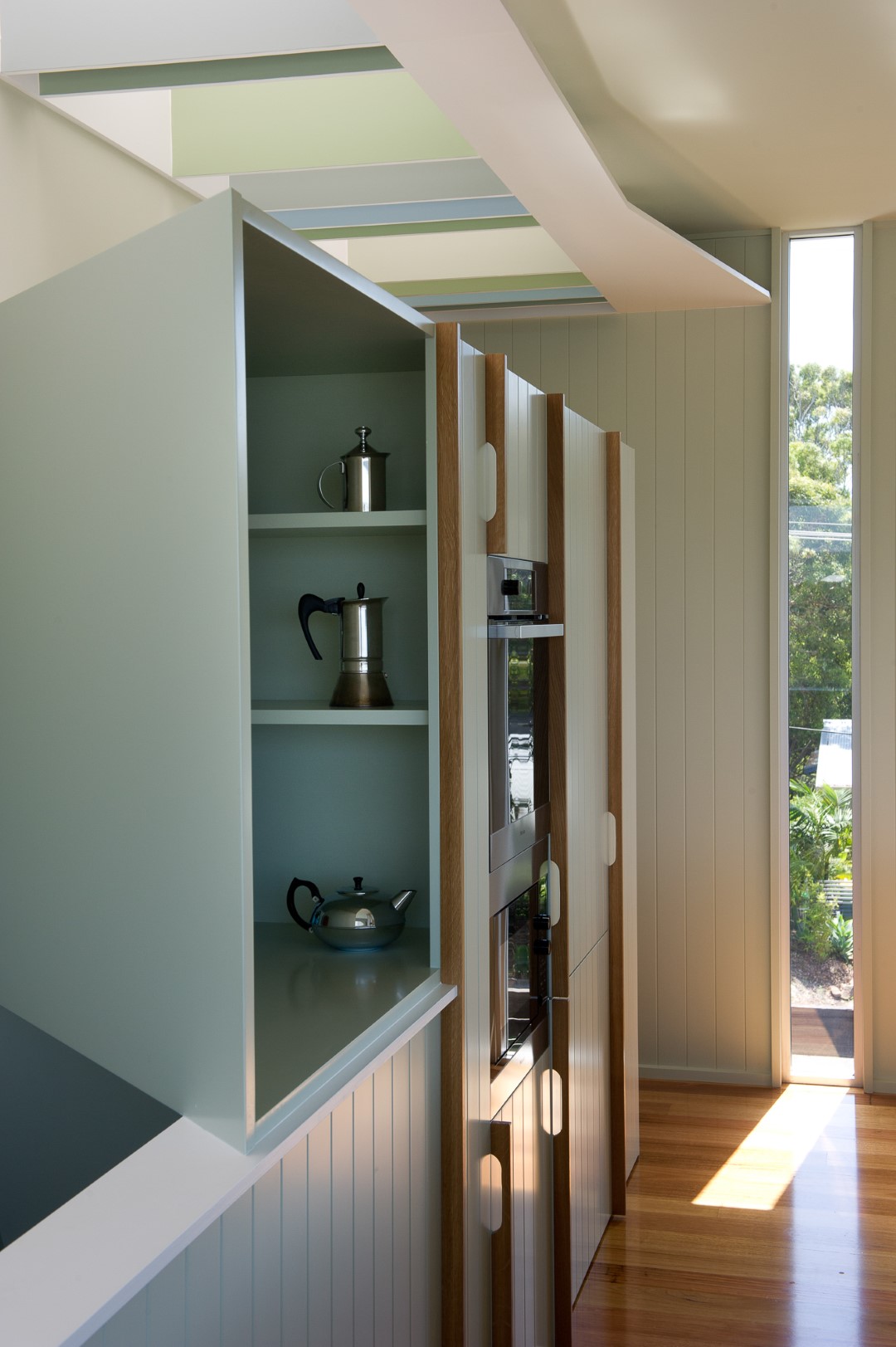 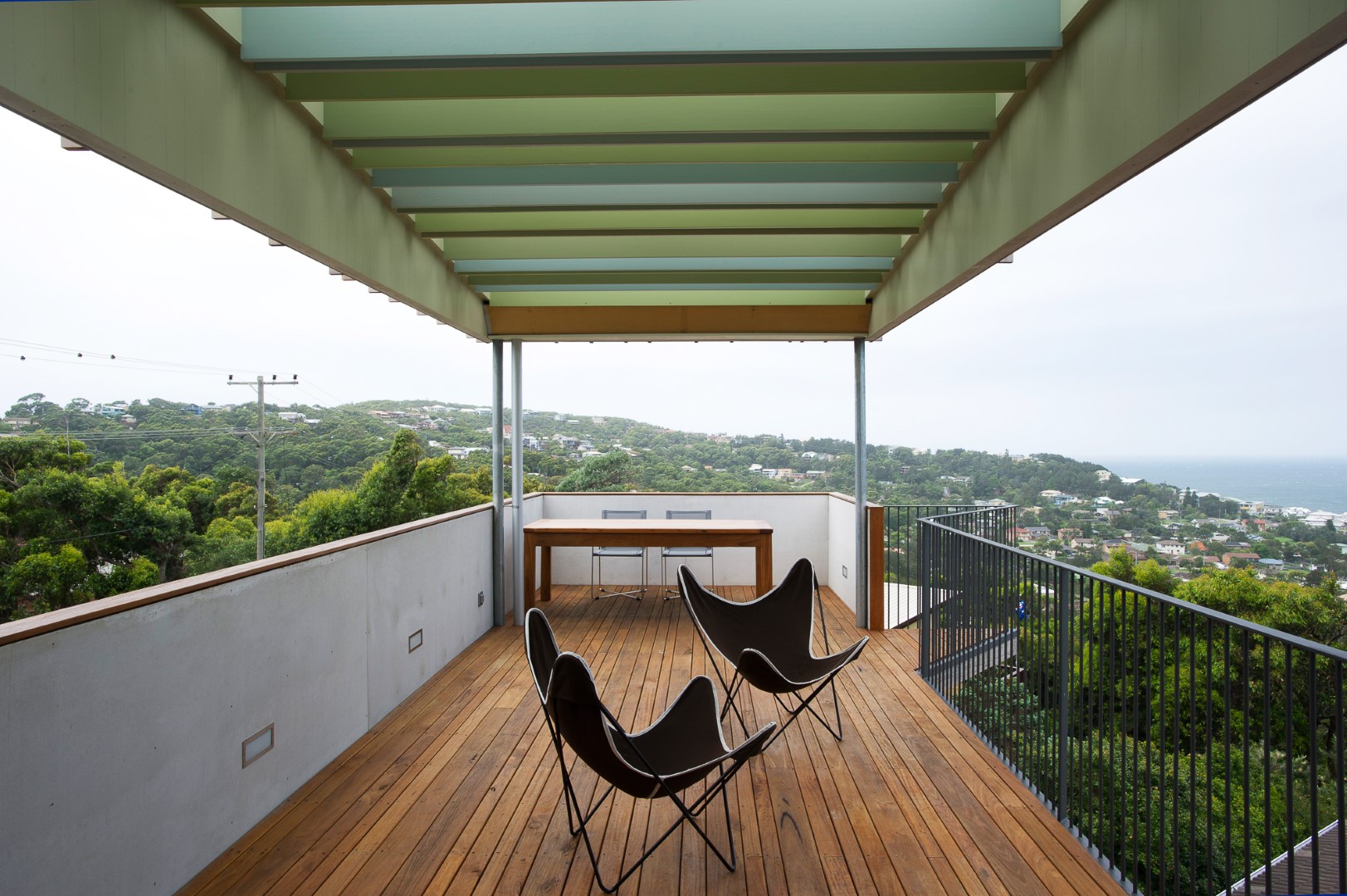 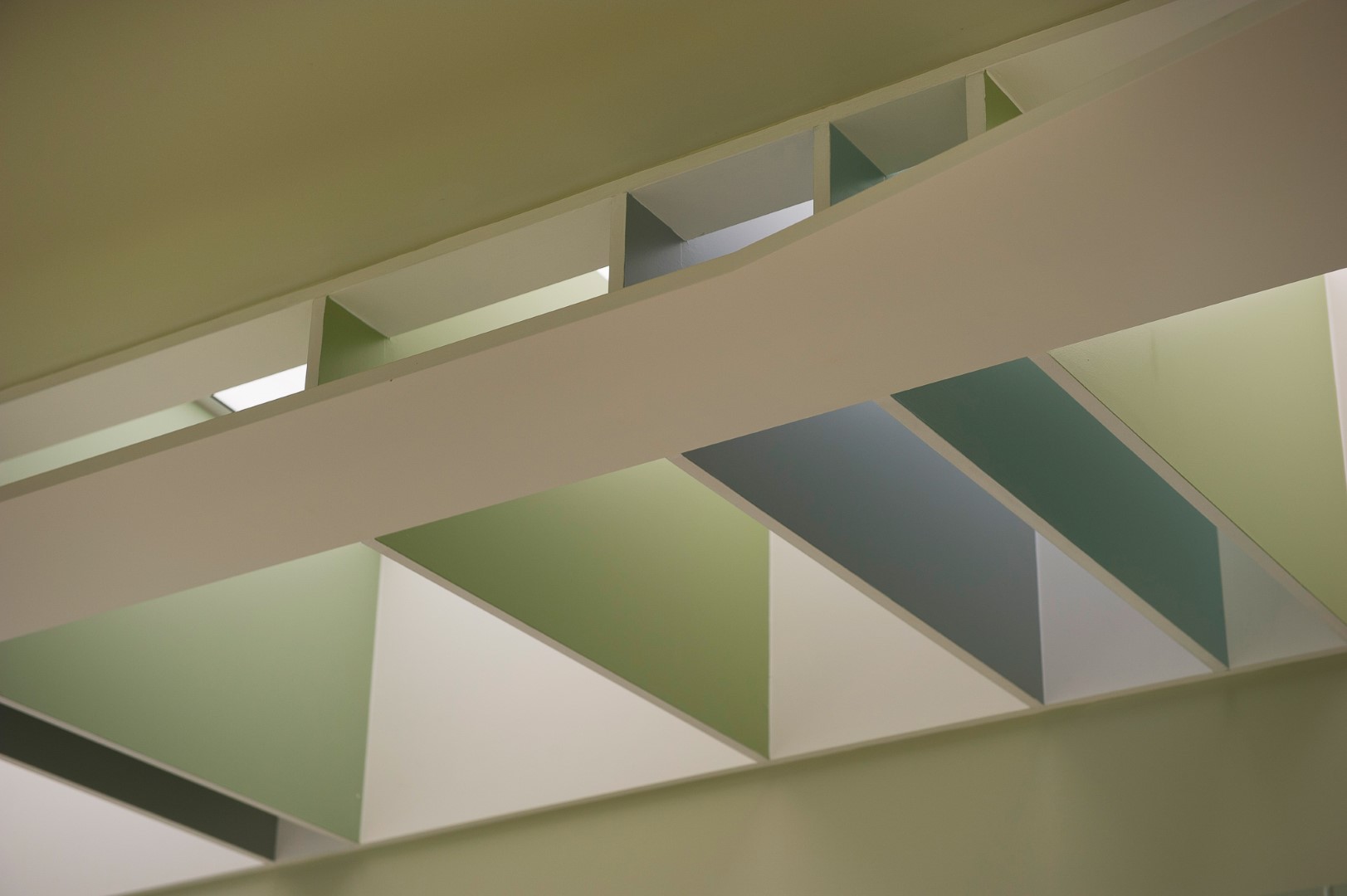 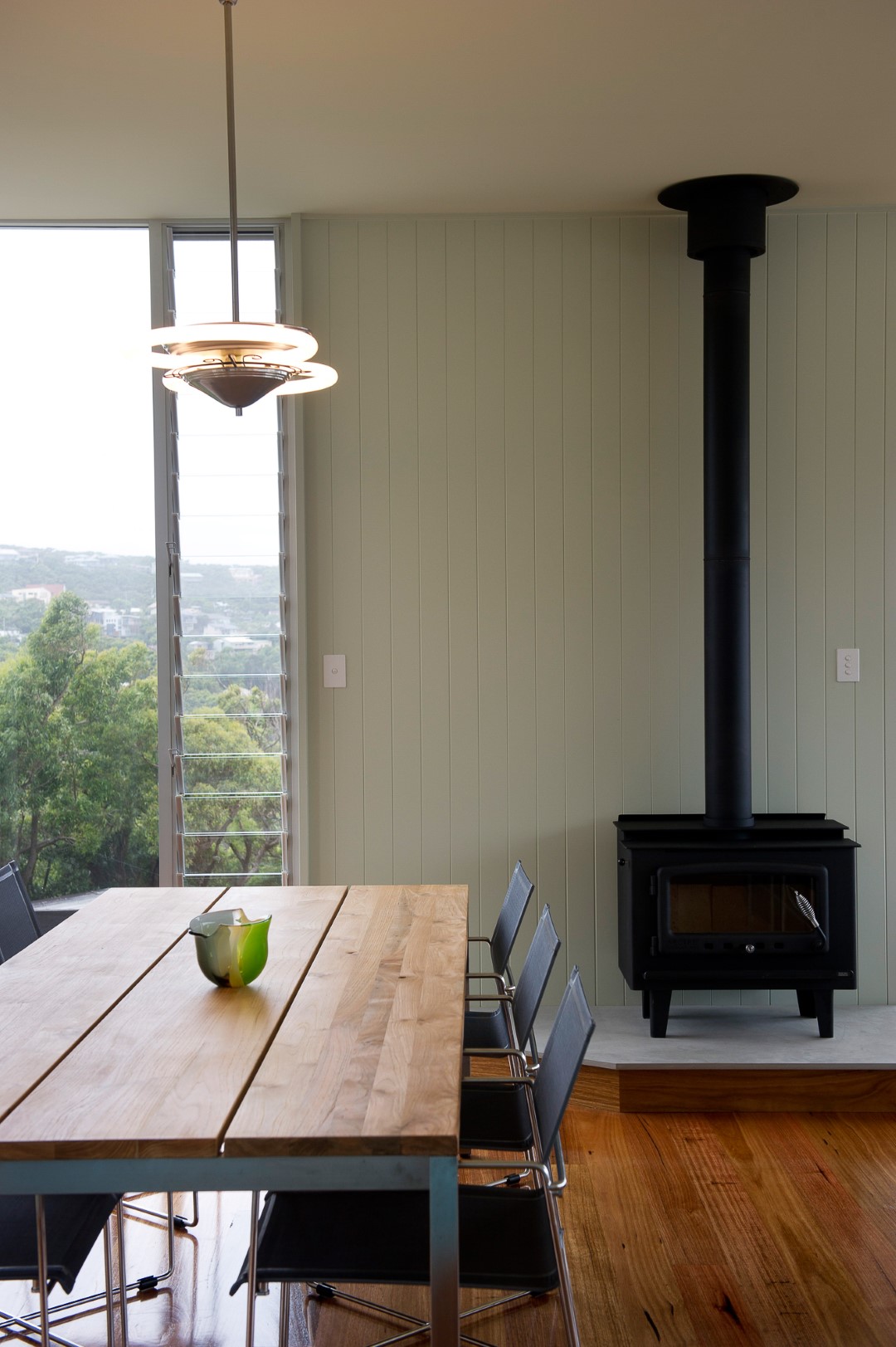 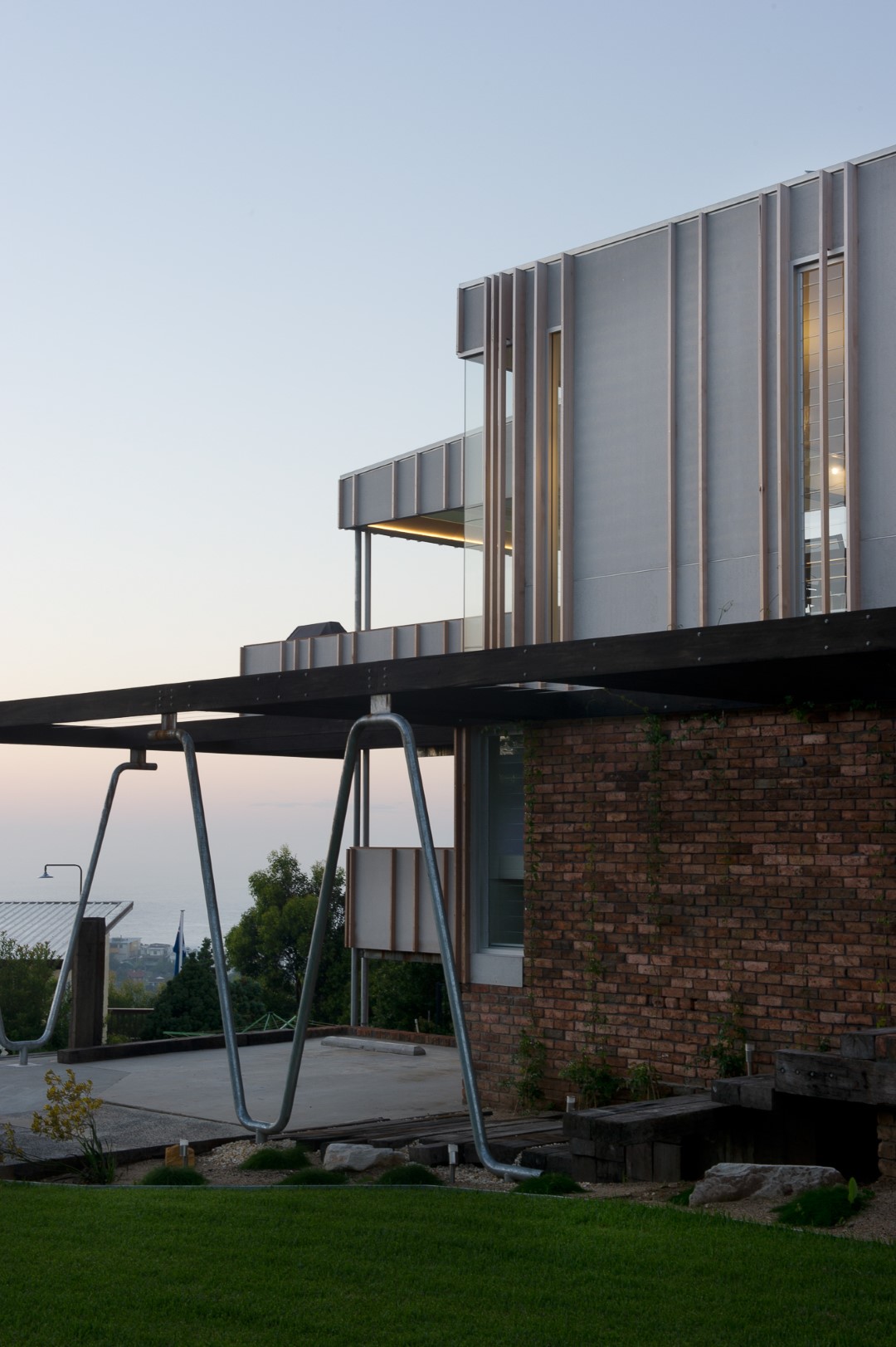 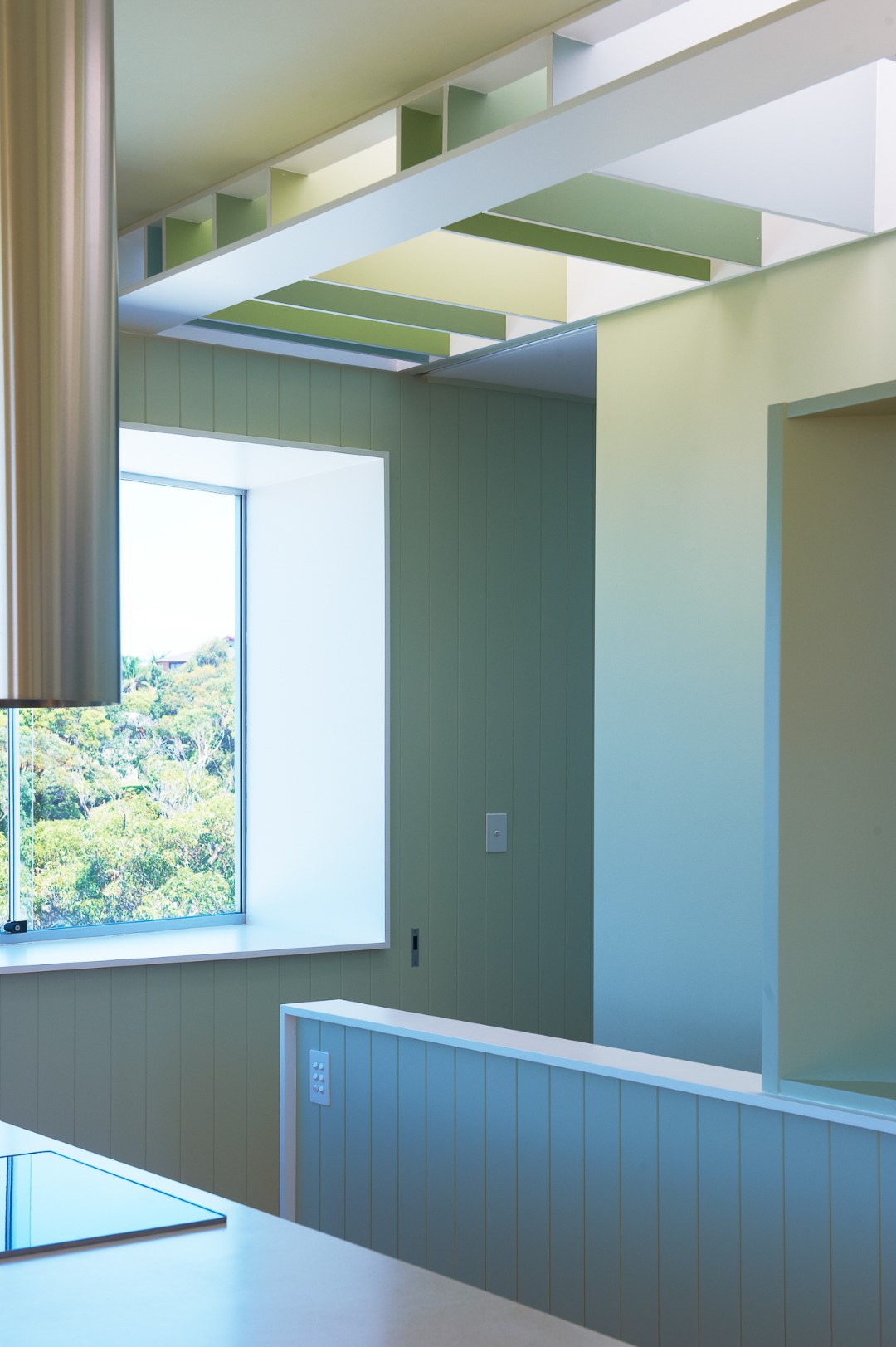 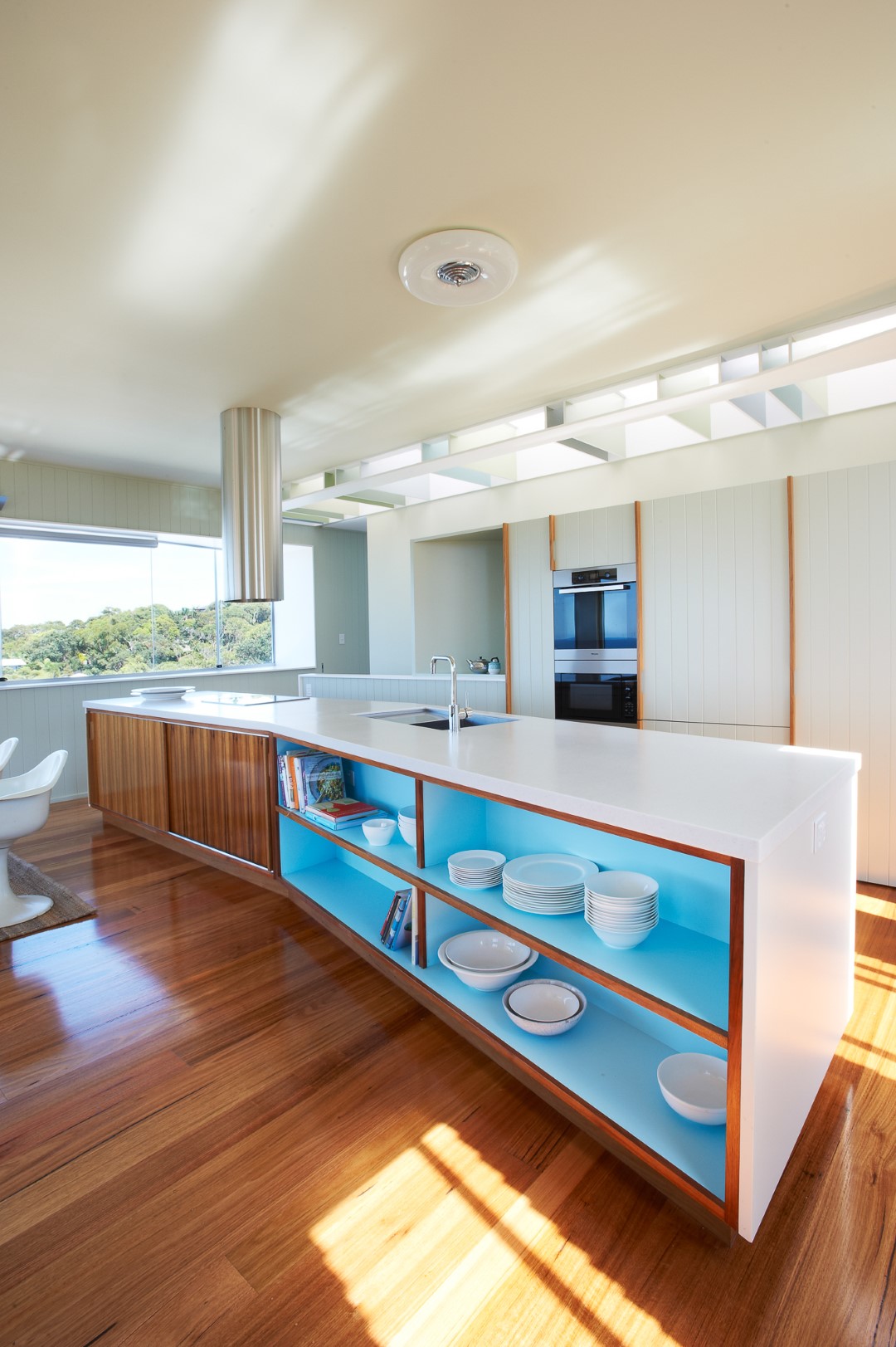 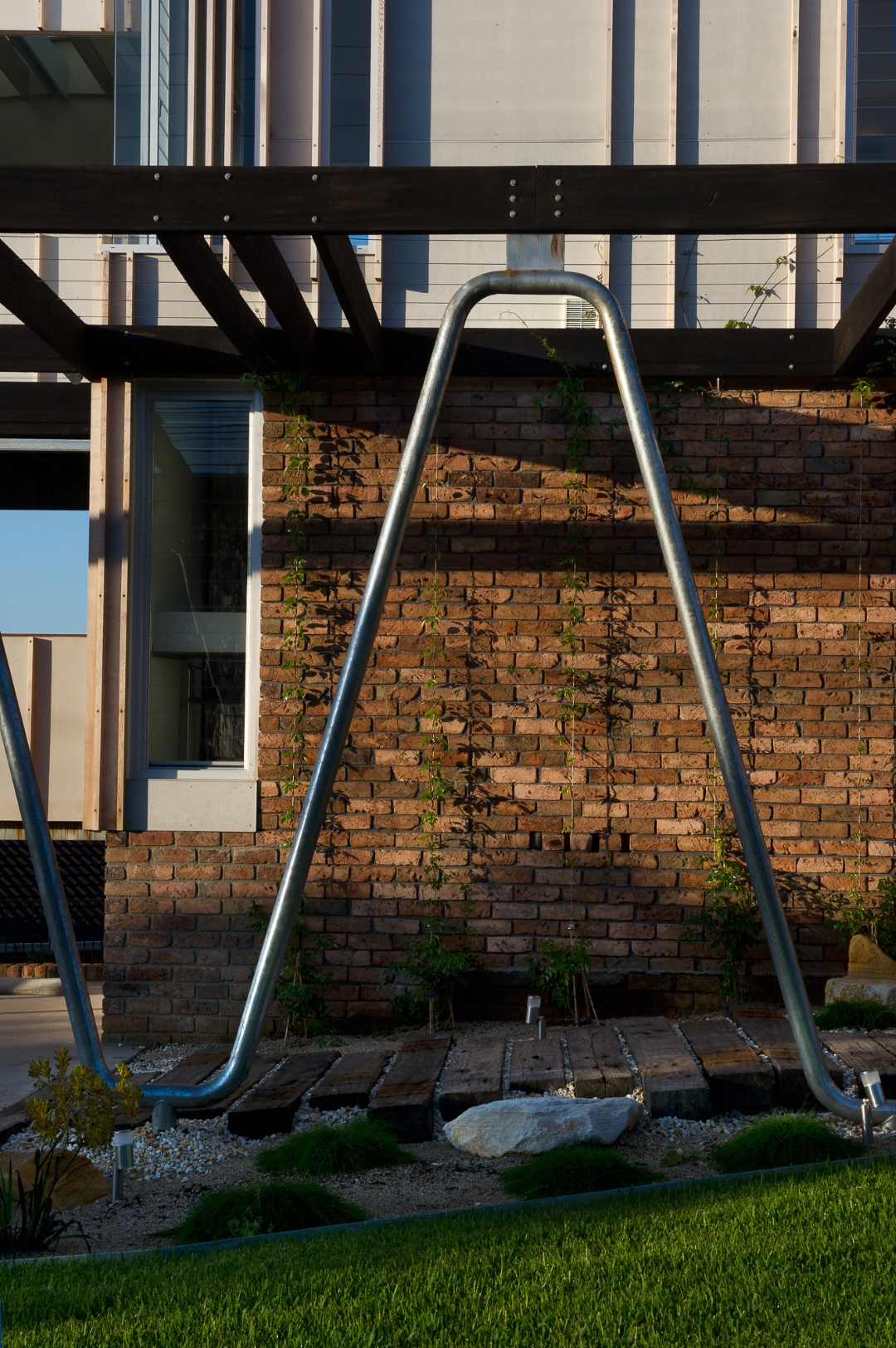 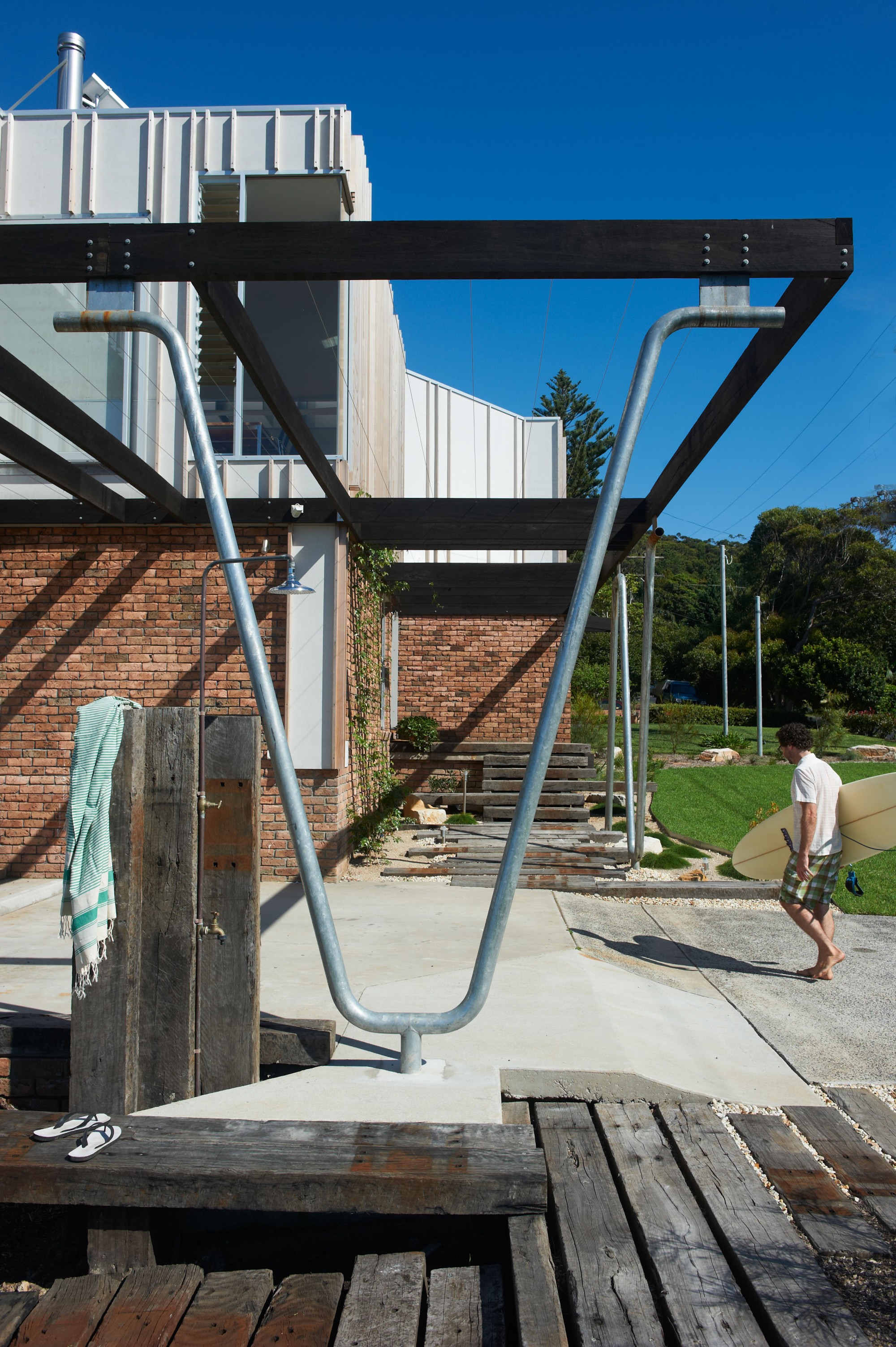 This project includes an upper level addition to a 1980’s clinker brick project home overlooking Copacabana Beach on the Central Coast. The project embraces its suburban context and provides a model for sustainable reuse. The new upper level enhances the existing structure and includes new living spaces, bedroom and deck taking advantage of the southerly views from the elevated site which is nestled high in the saddle between the Copacabana and Bouddi National Park headlands.

The elongated form of new upper level living area mirrors the headland's form, providing light and privacy from the street to the north and a platform from which to enjoy the view to the south. Low walls and solid balustrades capture the ocean view in a protective yet dramatic way. Coloured fins are lit by skylights which provide soft lighting to the central stair and projecting deck and reference classic holiday house style.

A sweeping pergola, which will eventually be covered with vines, provides a green horizontal border between the existing house and the new upper level. A dense pattern of timber battens provide an asymmetrical bay to the streetscape as a contemporary response in kin to the suburban context.

NSW AIA Jury Citation:
"David Boyle's Kellie Residence at Copacabana Beach is an exemplary alteration and addition. It is transformative but seamless, without scarring or discord.

An ugly existing single storey clinker brick house is re-used as a base for a new upper floor addition. The ugliness is no longer a liability, but is strangely illuminated in its new role. The new top experiments with the language of the coastal fibro cottage, simple in pattern, complex in form. It has both an abstract and animated presence on the street.

An existing deck, close to the boundary, with great distant views but unfortunate proximate outlook, is demolished. A new deck is located, counter to the usual approach, further back from the boundary and view, to the side of the new upper floor. This extraordinary suspended space now edits the foreground, engaging immediately with the headland beyond.

The new carport and pergola structure is both contemporary and nostalgic, reminescent of the joyous steel forms of the 1950's. When fully covered with climbing plants and the road is concealed, the walk-the-plank quality of the deck will be complete.

Protrusions from the facade create precisely choreographed moments. The bays create in turn a thickened sill for the kitchen and stair, a space for a small desk, and a tiny precipice space beyond the edge of the deck - its own tiny headland.

There is an enormous sense of delight and relaxation in this house. Carefully detailed, with large and small spaces made spatially complex and exquisitely coloured, the house feels welcoming and plesureable to inhabit. It is both serene and engaging, generous and intimate."